National Notes: Yep, 7-5 was the final between ranked teams 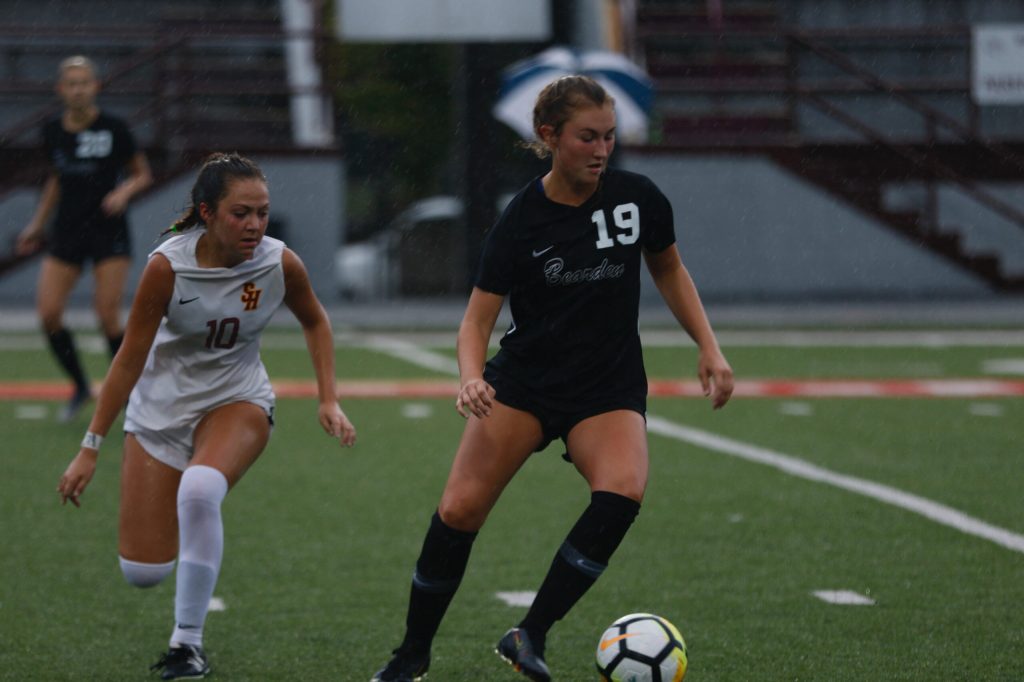 Imagine giving up five goals to a nationally ranked team … and winning!

That’s exactly the situation in which the girls at Lone Peak (Utah) found themselves Saturday in Boise, Idaho. In a Western powerhouse showdown, Lone Peak stunned Boise (Idaho), 7-5.

“It was nuts,” said Lone Peak coach Shantel Jolley, who has experienced her share of soccer matches. The Lone Peak alum represented the school during her high school days before a stellar playing career at Utah State. “I can’t think of ever being involved in a game like that. Usually, when a team scores seven goals, it’s like a 7-0 game.”

Lone Peak defeated defending state champ and another nationally ranked team in Rocky Mountain (Idaho), 2-1, on Friday. Lone Peak, which started the season No. 2 in Utah, is 5-0 and certain to jump up in the regional and FAB 50 rankings when the first of the weekly polls is released Tuesday, Aug. 31.

Despite scoring five goals, Boise, the preseason No. 15 team in the FAB 50, never led in the contest. Lone Peak went up 2-0 within 10 minutes, saw Boise respond with a pair of goals only to regain the lead at 3-2 going into halftime. Lone Peak surged ahead 4-2 and later 5-3, only to see the Smith-led Boise team tie the match at 5. Boise is led by Stanford commit Logan Smith and her younger sister, another national recruit, Samantha Smith.

In the final 12 minutes, Weber State commit Sayler Schlosser netted her fifth goal of the contest to lift Lone Peak into a 6-5 lead, and freshman standout Bella Devey finished off the scoring a few minutes later to cap the wild victory.

For Schlosser, it was quite the breakout performance to cap the weekend and a strong summer. She missed the team’s first few games with injuries, but ended up scoring one goal in the win over Rocky Mountain and then five against Boise. Last month, Schlosser was part of the Impact United SC team that won the US Youth Soccer Under-18 national title in Bradenton, Fla. Lone Peak’s lineup also featured BYU commit Camryn Jorgensen and Lacy Fox, who drew the defensive assignment on Samantha Smith.

STATING ITS CASE: While Lone Peak (Utah) pulled off a surprising pair of wins against ranked Idaho foes, the girls team at Bearden (Tenn.), ranked No. 10 in the preseason, posted two signature wins at the Meet in the Middle Tournament to kick off the Tennessee season.

Rebecca Roth netted the lone goal as Bearden upended state-ranked Father Ryan (Tenn.) 1-0. Brinley Murphy scored the first goal and assisted the last as Bearden completed the weekend sweep with a 4-3 win over Franklin in a rematch of last year’s Class AAA state semifinal contest. Nyla Blue, Alivia Stott and Jordan Hellman also scored for Bearden in what was a back-and-forth match. Fraklin started the season ranked No. 29 in the FAB 50.

OHIO STUNNER: Massillon Jackson (Ohio) has a strong girls program, but when it comes to facing the state’s elite, the results simply didn’t pan out — until last week.

Jackson upset preseason FAB 50 No. 2 Strongsville (Ohio), 1-0. It’s easily the most significant win for Jackson since defeating Walsh Jesuit (Ohio) in the playoffs in 2017, according to Jackson coach Frank Gagliardi, who is in his 27th season at the helm.

Strongsville went 21-0 and was an easy choice for FAB 50 national champion last fall. While several key players graduated, Strongsville is projected as a state title contender again this fall, but now has started 0-2. Still, Gagliardi is hoping Jackson will build off that confidence of the opening victory.

“We’re senior-heavy and now we’re going to see what that maturity level is like,” he said. “We need to be consistent and not let this be the highlight of the season. We don’t want to peak too early.”

Gagliardi said Jackson was fortunate to hang on for the result as Strongsville put them under pressure most of the match, especially late in the contest. He said Casey Stalder’s play in the defense helped Jackson seal the victory. Stalder is an uncommitted senior.

During the previous seasons, Jackson was 57-14-11, which included a state semifinal appearance. However, when it came to facing the “Big Three” in the Akron-Cleveland area — Medina, Strongsville and Walsh Jesuit — Jackson was 0-8-5, excluding the playoff win over Walsh.

LOWERING THE BOOM: Anchor Bay (Mich.) put up a stellar showing at the opening weekend Balconi Soccer Tournament. Anchor Bay was a preseason FAB 50 Top 25 team, so expectations are high, but even this Balconi showing was eye-opening. Anchor Bay shut out Salem (2-0) and Plymouth (4-0) and put a 5-1 beating on Canton, which was coming off a victory over defending state champion and preseason favorite Detroit Catholic Central.

TRADING PLACES: In one of the more interesting coaching moves this year, longtime Glastonbury (Conn.) boys coach Mark Landers has moved over to the school’s perennially strong girls program. In 20 years as the program’s boys coach, Landers coached teams to a 309-64-39 record with 16 league titles and eight state titles. He’s no stranger to the girls program as his daughter, currently playing for UConn, starred at Glastonbury just a few seasons ago. The Glastonbury girls program went 225-10-11 under coach Joe Finocchiaro, who coached his last match at the school last fall.