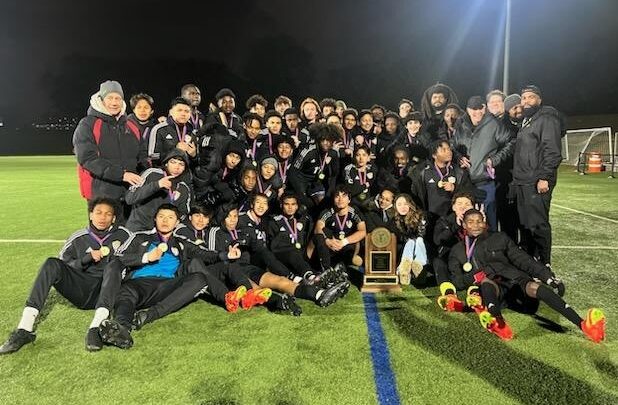 Around 6 p.m. EST Sunday evening, the fall high school season finally drew to a close with the completion of the Connecticut Class LL girls state final.

But long before that match kicked off, the No. 1s were settled for the fall season.

Bearden (Tenn.) secured the girls No. 1 ranking weeks ago, earning the program its first No. 1 finish and marking the first time since the inaugural FAB 50 debuted in 1999 that a Tennessee girls team had finished No. 1. Bearden started the season No. 2, climbed to No. 1 by midseason and then ran the table to keep the position.

St. Benedict’s posted a 17-0 season facing a strong regional schedule. Calvert Hall, meanwhile, went 24-0-1 while playing in the strongest high school soccer conference in the country. In other near comparison set of results, St. Benedict’s handled Delaware state champion Salesianum (Del.) 5-1. Salesianum, meanwhile, split their matches with Appoquinimink (Del.), and Calvert Hall routed Appo 7-0. St. Benedict’s lineup featured several rising star underclass players, while Calvert Hall was a senior-heavy squad. Back on to the results, St. Benedict’s defeated teams from six states and shut out all but three opponents. The wins over St. Ignatius and Salesianum were St. Benedict’s only results over a team that finished in the FAB 50. Calvert Hall, with four early NCAA Division I signees, competes in the MIAA A Conference, a league where all seven members have been in the FAB 50 at some point over the last four seasons. The last time an MIAA team went undefeated through the entire season was McDonogh (Md.) in 2013, the year it finished as FAB 50 No. 1. Calvert Hall went 2-0-1 against John Carroll (Md.), which also finished in the FAB 50.

The previous two ties for No. 1 were between St. Benedict’s and St. Ignatius. The first coming in 2005 when both went perfect against regional schedules. The second came in 2019 after the teams tied each other as part of both teams going undefeated.

The final FAB 50s are the last chance to order the teams based on results and talent.

In girls soccer, Skyline (Wash.) moves up to No. 2 for the final ranking after completing a dominating run through Washington with a star-filled lineup. Moon (Pa.) settles in at No. 3, followed by Noblesville (Ind.) and Portland Jesuit (Ore.). Portland Jesuit was the highest-ranked private school.